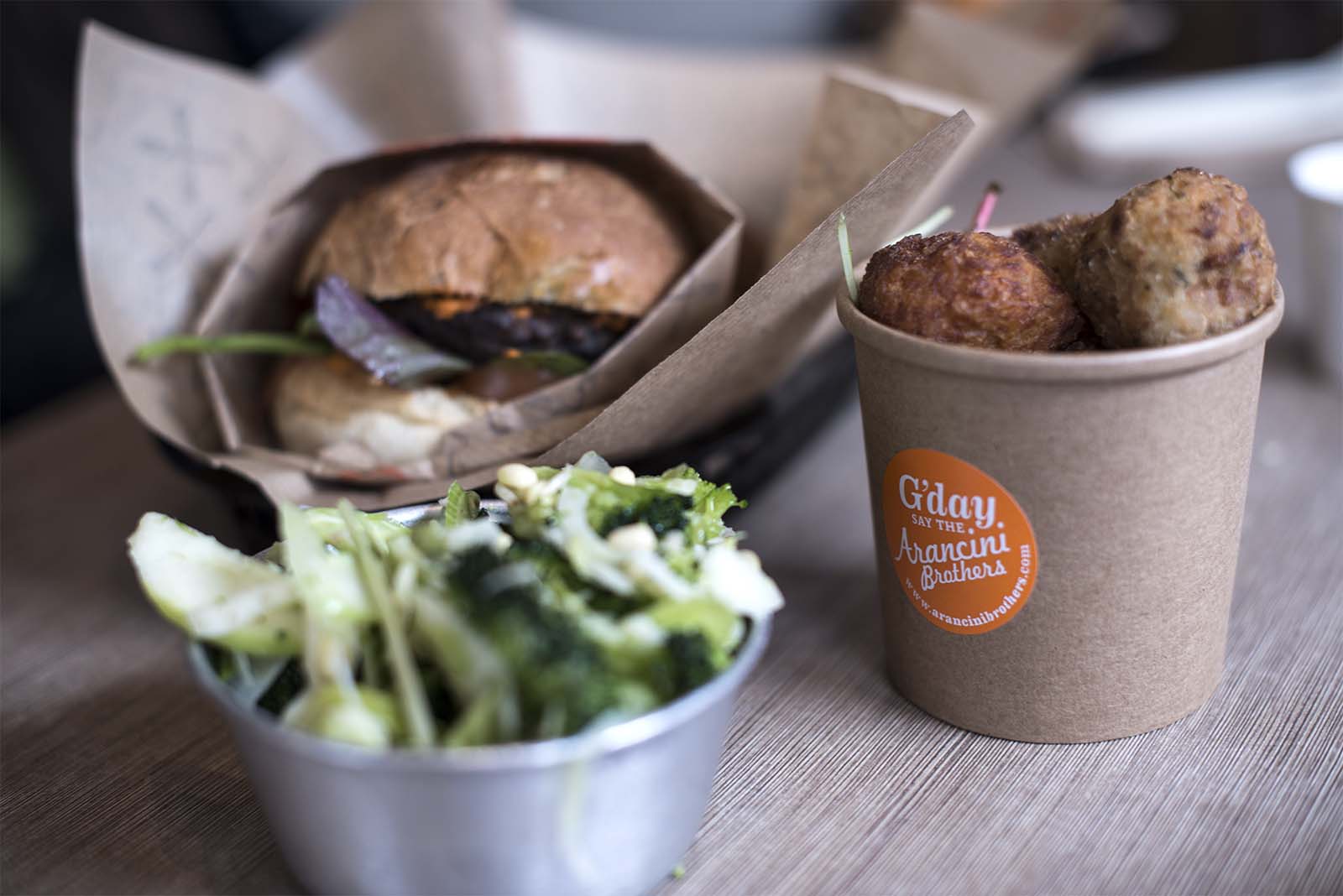 You can open a hamburger joint. Or a fish and chip stall. Or you can open something different, like the two Daves from Arancini Brothers did. The visionary Australian foodies, known as Big Dave and Little Dave, had the guts to bring arancini to Britain. There was one problem though. No one had a clue of what arancini was. Today Arancini Brothers has three locations and a thriving street food truck.

Mmm… MMM! It’s a crunchy and cheese-filled bite full of taste of the mozzarella and tones of citrus taste and flavour – sort of the best of two worlds. I’m enjoying a classic Sicilian dish that has turned into popular southern Italian street food. We are far from Sicily or even Naples  though, around the corner from Dalston Junction in east London. David Arkin in front me smiles:

– When we started out we were making the risotto balls – like the one you just had –  at home in my kitchen, says David. But we outgrew the home kitchen quickly and in 2011 we opened our first shop in Kentish town where we produced up to 20,000 hand rolled risotto balls per week.

The Arancini Brothers journey took off after David relocated to London from Australia – as a tiny market stall in Brick Lane eight years ago.

“What are you selling again?”

David admits that he and his partner, Little Dave, had a hard time in the beginning.

– One first learning was the name. We called them arancini, the correct Italian or Sicilian word for stuffed rice balls coated with breadcrumbs and then deep fried, but only met blank faces. So, we relabelled them as risotto balls – and then the penny dropped.

We have learnt that our customers are really price-sensitive – and few are willing to pay for great food. That creates a difficult equation.

Second challenge? The price. It was – and still is, according to David.

– When we opened our location in Dalston people immediately compared us to the chicken shop on the corner where you could get a burger for £1,95. Until they took their first bite of a risotto ball. Then they got it.

With all risotto balls being handmade, gluten free, vegetarian and/or vegan, Arancini Brothers for natural reasons can’t keep the same prices as the cheap take out joints.

Reduce hours spent in the stores – and grow (for real)

– I used to do hundred hour weeks during our first years – but now I have two kids and stick to more regular hours, except festival season of course, says David.

In fact it was reducing the number of hours spent working in the stores that made David realise the importance of planning. As someone who loves customer service it wasn’t an easy move though.

If it doesn’t work – put it in a bread and you’ve solved all your problems, haha… But there is a lot of truth to that!

– I really had to dare to step away from the business. By doing that I could focus on our products and the overall direction of the business better. And after nine months our revenues started to go up.

LAGUNITAS #IPA… A beer with a bite!

What David would have done differently

–  If I could go back in time eight years, I would have created a business plan then instead of now. I promise you, it’ll help you on so many levels. Not only getting a bank loan, but it helps you drive the business in the right direction long-term.

How to continue growing

– We don’t look at our competition, we look at ourselves and how we can improve. Problem is, many people still don’t really wanna pay. Remember that we’re in an industry where customers are extremely price-sensitive. That’s why we recently started working with a PR company that will help us communicate what we actually do, how we do it – and why we do it.

– I’m still driven by seeing people enjoying our food – and knowing that we create it fully ourselves instead of buying it from a supplier, David concludes with a grin.