From Big Issue seller to full-time online entrepreneur. We chatted with Simon Mott about sales forecasting, ‘mobile first’ and how he changed his life.

– No, I would never go back to working at Sainsbury’s. Or being a tube-driver – I like being my own boss, you’re responsible for everything yourself.

Simon Mott looks at me without blinking. It has been four years since we met for the first time. A lot of things have changed since then.

– You never see yourself in the position of being homeless, but when it happens you can either sit back and do nothing – or you can help yourself and do the Big Issue like I did, Simon explains.

I run my business from my phone – I take my cards from Zettle, run my Shopify webshop from there.

For nearly twenty years, Simon Mott worked as a tube driver for the London Underground. But after an accident at work he lost his job, and then his flat. For a period of time, he slept on the N8 and other night buses, until one day he met a vendor who advised him to go and sign up to sell The Big Issue. Simon remembered his mum always buying the magazine at Victoria Station and gave it a try. It became a turning point in his life.

– Becoming a vendor of the magazine helped me survive on a day-to-day basis. It kept me ticking when there wasn’t much else. I liked selling and I liked my pitch.

For three years, Simon sold The Big Issue outside South Kensington tube station. The Big Issue foundation allows homeless, almost homeless or marginalised people to purchase the magazine for £1.25 per copy and sell it on the streets at £2.50. Thus 50% of the cover price goes directly to the vendor, giving them the support they need to get back on their feet.

I’m everything, I’m head of I.T, head of finance, head of marketing and …

Sparking the entrepreneur within

While selling the magazine, Simon started forecasting how many issues to buy each week to make sure he didn’t overstock. And he tackled the problem of fewer people carrying cash by signing up with Zettle and accepting card payments, a tactic that received national media coverage.

Something had sparked his inner entrepreneurial drive. After finding privately rented accommodation back in 2013, he opened an Ebay shop. He mainly buys overstock of children’s clothes from bigger retailers and other smaller items that are easy to store. Clothes that would otherwise have been destroyed are now re-sold, meaning his business helps towards a more sustainable fashion future.

What is The Big Issue Foundation?
The Big Issue foundation exists to support its magazine vendors and help them take control of their lives. All vendors of the magazine receive training – and can also be identified by their badges with a number, photo and a vendor number. As of June 2017 there are 1,450 Big Issue sellers working on the streets and The Big Issue Magazine is read by close to 380,000 people across the UK each week.

When we meet Simon today, he brings up the kind of challenges any small business faces in 2017, like the rising costs of advertising on Google, poorly responsive website structures and the ever-changing terms and conditions on Ebay.

– I’m everything, I’m head of I.T, head of finance, head of marketing – I spent way too much on Google ads last month, in fact Twitter was more profitable for me, says Simon who runs his business solely on his phone. Accepting payments and tracking sales with Zettle and running his webshop with Shopify.

– In the future I would like to get my own accountant, I just took an online accounting class, says Simon, who donates 10% of his revenues to The Big Issue Foundation.

Zettle offers a discounted card transaction fee of 1,5% to The Big Issue foundation and other charity organisations. 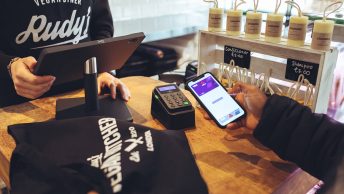