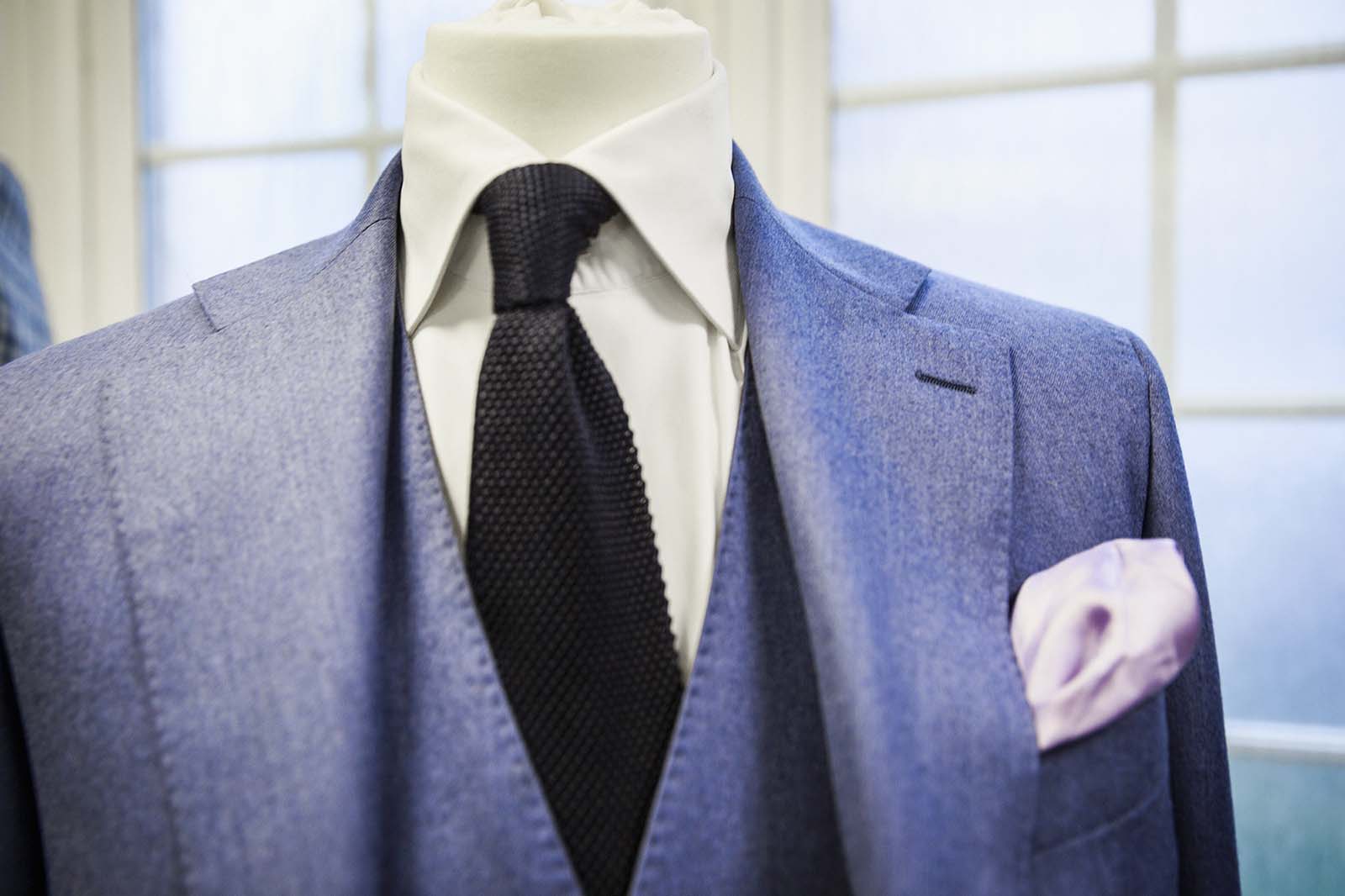 For years James Palombo worked for one of London’s most traditional and reputable tailors. Step by step he understood the secrets behind a world-class suit and launched his own company on those ideas – a private visiting tailor with a modern twist.

“A lawyer spends 12 hours in the office. Give him a too slim pair of trousers and the circulation in his legs will have totally disappeared by the end of the day. I always start off by finding out exactly what someone expects from their suit…”

Give him a too slim pair of trousers and the circulation in his legs will have totally disappeared by the end of the day.

“It doesn’t matter if you’re the owner of Ferrari or a small company – you need to have a plan for every day, every week, every month and every year. If you do, good things will happen”, he says without blinking an eye. And in the case of James Palombo, good things did happen.

James’ checklist for buying a suit:

James went into tailoring when he started as an appointment maker for one of London’s most traditional and reputable tailors. They crafted the same garments that they had been doing forever and as their client base grew older James slowly felt an urge to deliver clients with more modern garments but importantly, still using the old high quality methods.

“If you don’t do it now, you’ll regret it. And if you do it and it doesn’t work – at least you’ve tried, a friend of mine told me one day.” But actually making it was another story. One day 6 years ago James did it – he resigned and started a bespoke visiting tailoring service out all by himself, going into London taking orders everyday.

“There were some sleepless nights to begin with”, admits James who at the time just had had his first daughter. “But so many of my old customers followed me and really they helped me get up and running.”

A Forbes’ article 15 years ago stated that the suits were back – while they for boardroom members never went away. This more conscious approach to the suit as a necessary garment for certain professions as well as an indicator of subtle discretion and taste – lies very close to James’s philosophy. The idea he put into practice was to deliver fully customized suits following traditional tailoring methods – while establishing a relationship for life.

A necessary garment as well as an indicator of discretion and taste.

About two years of running his own business, it was one of the loyal customers who approached James and insisted on investing in the company. “James Palombo London” was born:

“I went from being on my own to only months later having both an office and a sales team.”

As James Palombo London has grown into a prestigious garment brand – using traditional tailoring methods with a modern twist – James himself has realized that teaching and working close together with his sales team motivates him on a higher level.

“I know these 25-30-something guys because I have been one of them myself!”, James says and smiles.

“They want to earn a lot of money – but what they first and foremost need is guidance, someone that supports them and make a plan for them. That’s what I’m trying to do”, he concludes, before taking off to yet another law firm.

Prior to using Zettle, James Palombo relied on bank transfers and cheques. The now immediate payments speed up the entire process and his customers feel more secured that their payments are secured. This fall he upgraded to the new Zettle mobile card reader.